“I had a GREAT time at Dead Ends Live! I met a bunch of great musicians, played two full sets with the amazing Joe Craven, and got to perform in a beautiful church in front of a full house!” 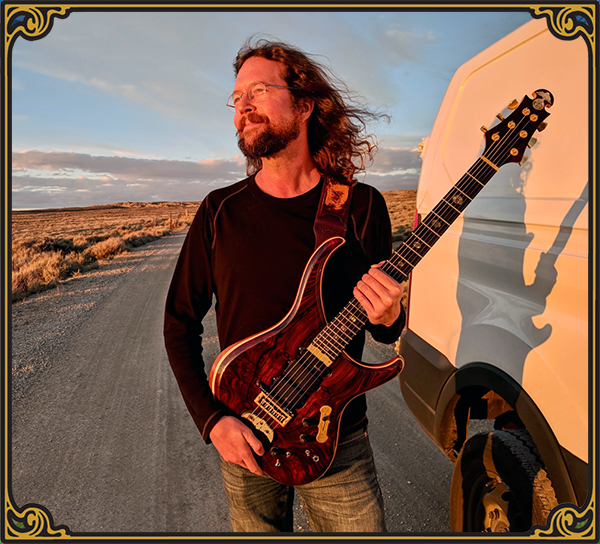 John Kadlecik is a singer, songwriter, and musician who can play most string instruments, but is primarily known for being a guitar-slinging sideman and vocalist to Grateful Dead members Phil Lesh and Bob Weir in the band Furthur.

Also, an original co-founder of the group Dark Star Orchestra, John has been performing improvisational-oriented shows regularly since the late 1980s and has performed worldwide for the better part of the last 30+ years.

After performing with Hammond B3 master Melvin Seals many times over the years, John became a full-time member of Melvin Seals & JGB in 2019 and continues to play with JGB to excited audiences nationwide. His work also includes several studio releases of original music, and he is currently active with his solo Acousti’Lectric show, Melvin Seals & JGB, The John Kadlecik Band, Keller Williams Grateful Gospel, and “supergroup” the Golden Gate Wingmen.

Joe Craven is a Freestyle folk, world and roots music multi-instrumentalist, singer and award-winning educator. He plays fiddle, mandolin, ukulele, tres, cavaquinho, balalaika, as well as a world of percussion. Craven is a well-known sight at acoustic music festivals and, for many years, was violinist and percussionist for the Jerry Garcia/David Grisman Band and the David Grisman Quintet, and he recorded extensively with both groups.

Joe was also a member of the acoustic super-group Psychograss with other Grisman alumni, Todd Phillips, Darol Anger and Mike Marshall. He’s played and recorded with many other greats including, Stephane Grappelli, Alison Brown, Rob Ickes and David Lindley and his discography includes such critically acclaimed titles as Camptown, Django Latino and The Garcia Songbook which has been called, “the best Grateful Dead / Garcia cover album yet.”

“David Gans has a wonderful way of getting to the emotional center of Grateful Dead songs. He has very much his own twist on these world treasures and yet pays proper homage to the elements that made them great”

David Gans is a musician, songwriter and journalist. He is a guitarist known for incisive, literate song-writing. He is also noted for his music loop work, often creating spontaneous compositions in performance. David has also co-written songs with Robert Hunter, Peter Rowan and Tim Carbone of Railroad Earth, while members of RatDog, Phil Lesh & Friends, as well as David Grisman, and Darol Anger have played on David’s solo albums.

He is the co-author and author of many books including Playing in the Band: An Oral and Visual Portrait of the Grateful Dead, and Conversations With The Dead. He’s host of the weekly syndicated radio show The Grateful Dead Hour and co-hosts Sirius XM39s Tales from the Golden Road, a call-in show about the Grateful Dead. David has been involved in many facets of Dead compilations and re-issues, too many to name here, but he was one of the producers of the brilliant So Many Roads (1965-1995) Grateful Dead box set and the Jerry Garcia box, All Good Things. He has also co-written songs with Robert Hunter, Peter Rowan and Tim Carbone of Railroad Earth. 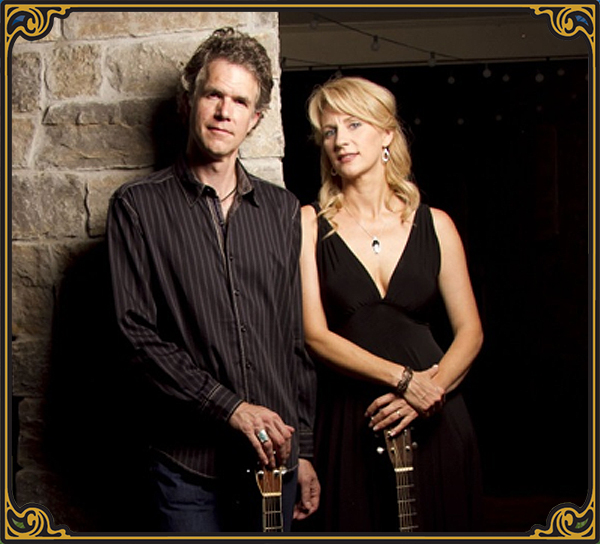 New Yorker Chris Jones’s interest in bluegrass was sparked when he lived in Albuquerque with his father and stepmother who listened to country and bluegrass. He took up guitar at age 12 and by age 18 was playing with New York’s Horse Country as lead singer and guitarist. After four years with Chicago’s the Special Consensus, he played with Whetstone Run, the Lynn Morris Band, the McCarters, and Dave Evans.

Jones moved to Nashville in 1989 as a member of the band Weary Hearts, and formed Chris Jones and the Night Drivers in 1995 and has been recording and touring since. He has performed with the Chieftains, Vassar Clements, Tom T Hall and Earl Scruggs.

“We are really looking forward to sharing some of the music that was an important part of the bluegrass and folk roots of the Grateful Dead. From songs like “Dark Hollow” to “Deep Ellum Blues” which draw connections between the Dead and musicians like Bill Monroe and Red Allen, we’ll honour the artists and sounds that both influenced us and captivated the imagination of Jerry Garcia in the 1960s and 70s. “

Albertan Sally Jones has over a decade of experience as a guitarist and harmony singer with the likes of Tom T. Hall, Marie Osmond, Harley Allen and Andrea Roberts, writing songs all the while. Sally’s vocal ability has earned her work in Nashville’s highly competitive studio scene, and as a songwriter, she has co-written with some of the business’s most respected writers, including Harley Allen and John Pennell. She has extensive experience as a singer and guitarist in both bluegrass and country music, and has performed and recorded with her husband Chris Jones, and brother-in-law Ron Block. To top off this varied musical resume, Sally added some formal education, earning a Bachelor’s Degree in Music, and a Master’s Degree in Writing.

Sally has the kind of voice and stage presence that quickly draws in an audience, and the broad spectrum of her musical experience enables her to appeal easily to both traditional and more contemporary listeners. Appearances nationally and internationally have included the Ryman, MerleFest, Salmon Arm Roots & Blues Festival, and the European World of Bluegrass to name a few.  Sally appears at Dead Ends Live with husband Chris Jones. 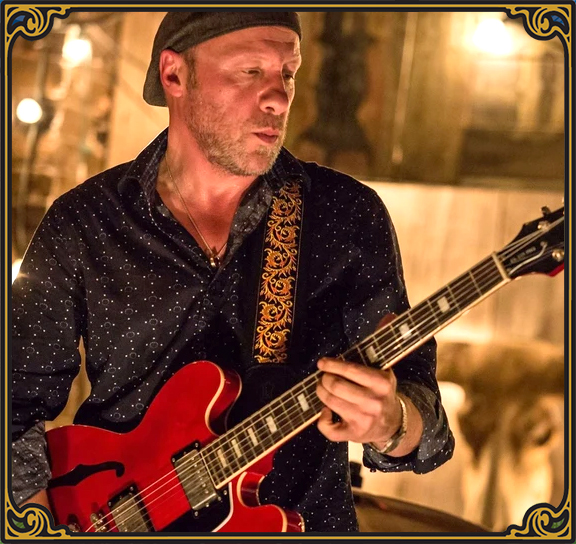 Guitarist, songwriter and singer Tony D is best known for

his role in the award-winning trio MonkeyJunk which he

formed 15 years ago with Steve Marriner and Matt Sobb.

Tony D is a ferocious guitar player who has a style

uniquely his own, but one that is informed by many

sources, both contemporary and traditional.

This Ottawa-native is a Juno, Maple Blues and American

Blues Music Award winner who has created a deep

catalogue, and appearances on albums and/or tours with

For Dead Ends Live, Tony D will be bringing his cool

tones, ability to improvise and jam and his good time

spirit to the ballroom setting with the Dave Babcock

Band. On the acoustic front Tony will peel off some

blues legends Lightnin’ Hopkins and Rev. Gary Davis in a

solo acoustic setting for the Roots of the Grateful Dead 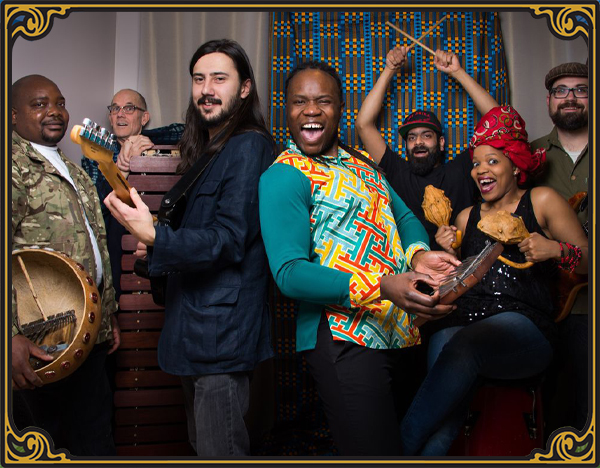 The Mbira Renaissance Band: will have any audience on its feet and dancing! Based in Edmonton, Alberta, Canada, the band delivers an afro-fusion, Thomas Mapfumo, Andy Brown and Bhundu Boys inspired sound that pays homage to the rich, ancient, musical genre of mbira music which has its roots in Zimbabwe. The members make up an eclectic group; drawing on their musical backgrounds in jazz, rock, Mediterranean, traditional Zimbabwean, and reggae music.

Upbeat, hypnotic songs weave elements of traditional mbira, jazz, reggae and afro-pop. The lyrics are sung predominantly in Shona and tell stories of love, migration, African – Canadian connections and a love of culture and tradition. The band features Geo Koufogiannakis on guitar, Vinay Jhass on drums, James Stuart on bass and Munya Vialy on keyboards. The Mbira Renaissance Band experience is a blend of visually appealing traditional and contemporary dancing by lead vocalist and mbira player Chaka Zinyemba and vocalist Chiedza Zinyemba. 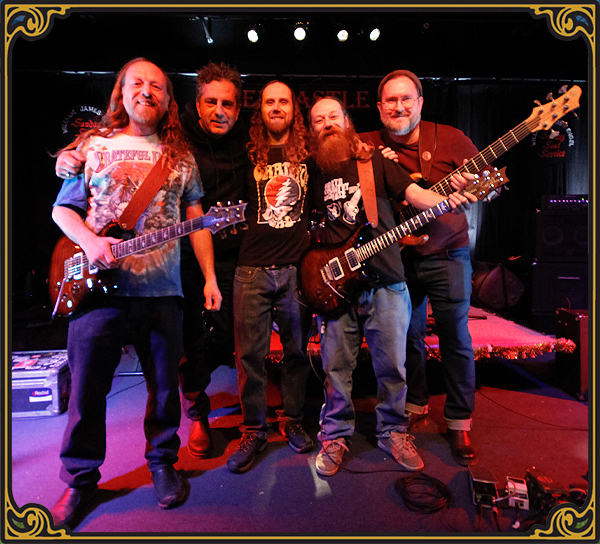 The McGowan Family Band is an Edmonton based musical ensemble dedicated to producing innovative music and high energy shows that are accessible to a wide audience of all musical tastes and ages. With musical influences that include rock, folk, reggae and blues, The McGowan Family Band is looking to take their music on a career path by playing to new audiences on a regular basis. Between their original songs and familiar cover tunes, they are able to perform at any event. 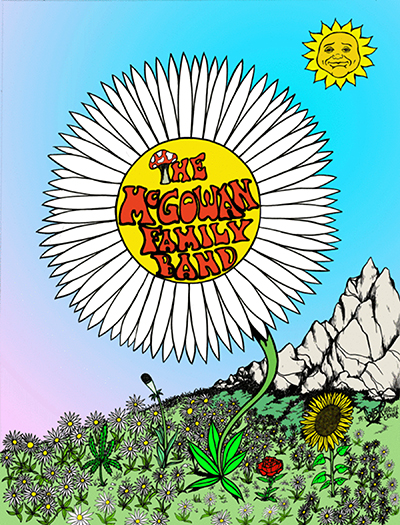 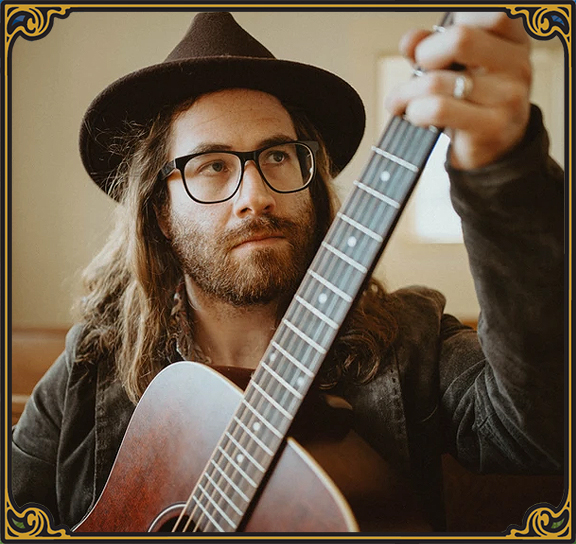 John Hewitt is a singer/songwriter, multi-instrumentalist, producer and filmmaker based out of Edmonton Alberta. In March of 2020 John’s Alberta debut was set to be released titled “American Hotel” but the pandemic brought all motion to a halt. Focussing on the studio and songwriting he continued to produce, write and record throughout 2021. coming up with material for 2021’s “Dead Lovers” and “Hollywood Reality” and 2022’s “Life Blood & Tears”.

In that time he produced in his studio local Edmonton acts including Will Ryan’s “Way on Down the Mountainside” and Angie Klein’s “Made in Alberta”.

John continues to tour and between tours he continues to produce local Edmonton acts including his own works. Life Blood and Tears: Volume II and Chaos and Conversation set to be released in 2023.

Music has taken Christine from touring Canada’s High Arctic with a tango trio, to playing Scottish Traditional music in the Outer Hebrides of Scotland.

While classically trained, Christine in her many roles – cellist, composer and sound designer, is eclectic in her musical explorations.Her experiences include compositional commissions, arranging, studio sessions, theatre work, and performing as an ensemble musician with a variety of groups that play classical, folk, pop-jazz, and experimental music.

She is an experienced instructor, teaching professional master classes in workshop settings on both sides of the Atlantic. Christine was presented with CBC’s “Galaxie Award” for Best New Artist at Canada’s Junofest 2006!

During Dead Ends Live Christine will be guesting with

some of the featured performers and adding her own

material to the program.

Edmonton and surrounding area is home to a great

number of fiddle/violin players and some of these terrific
instrumentalists will be featured in a Fiddle Summit at
MacDougall United Church on Saturday afternoon.

North America, so we thought we’d use their inspiration
to put together a similar event.

player Daniel Gervais will host our Fiddle Summit with an
all-star cast that will include Calvin Vollrath, Jeremiah
McDade, and Shannon Johnson.

The Dead Ends audience is guaranteed to hear some

magical interplay on tunes that will run from swing to
Celtic, to east coast traditional tunes thru gypsy jazz and
more. Incidentally Daniel is the only Albertan to have
won the Canadian Grand Master Fiddle Competition and
all the participants in our Fiddle Summit are critically
acclaimed artists in their own right.

ROOTS OF THE GRATEFUL DEAD (workshop)

Tracing the roots of musical influences of members of

the Grateful Dead has been the subject of many research

papers, music magazine articles and even the odd thesis

as well as the theme of a few recordings. For many of us, albums like Bear’s Choice (History of the Grateful Dead)

really began shining the light on what the members of

The Dead were tuned into as did recordings like

Reckoning. The album The Music Never Stopped, which

Dobson, was called “The Genetic Code of the Grateful

Dead,” by our friend and Dead Ends Live artist David

Garcia was a bluegrass devotee, Pigpen was a hardcore

classics and Robert Hunter was tuned into the oral folk

tradition and classic writers of the 18th and 19th centuries.

There’s a lot of territory to cover.

For this workshop, the Dead Ends Live audience will hear

a superb group of musicians offer up everything from

Edmonton’s John Hewitt will host this workshop that will

wind its way through all those aforementioned genres

The Roots of the Grateful Dead will feature appearances 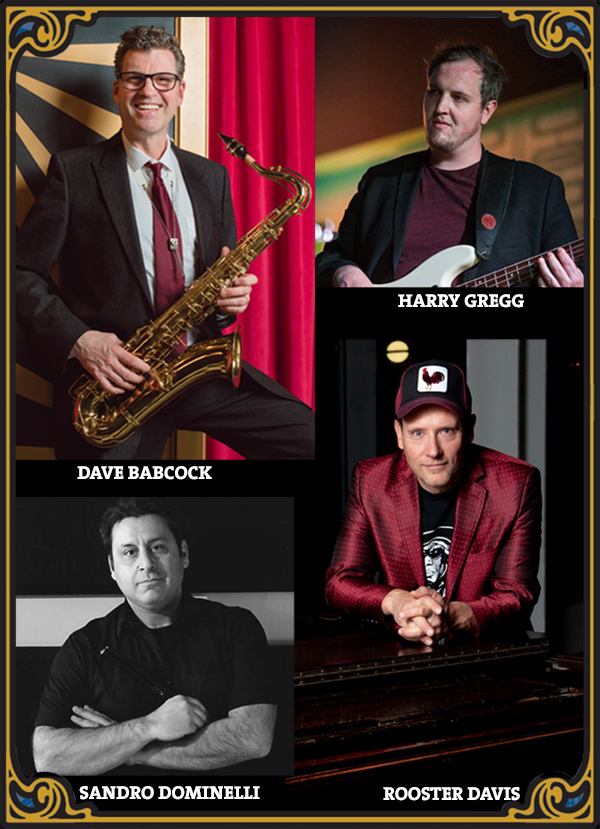 Dave Babcock is simply one of Edmonton’s finest and best known musicians who has also been one of our busiest musicians for the last four decades.